The name „Asmat“ comes most probably from the words As Akat, which according to the Asmat means: „the right man“. Others say it derives from the word Osamat meaning „man from tree“.

The Asmat is an ethnic group of former cannibals and headhunters that live along the remote southwest coast of Papua. They have been often described as a wood-age culture dedicated to hunting and fishing, famed for their elaborate woodcarving.

The approximately 70,000 Asmat people are scattered in 100 villages across a 27,000 square kilometer area, encompassing some of the last unexplored regions of the world. It comprises a low-lying territory of bog forest, endless swamps, and meandering rivers emptying into the Arafura Sea.

Dutch outposts, missionary settlements, and foreign expeditions finally made inroads into this isolated community only in the 1950’s and 60’s, introducing steel fishing hooks, knives and metal axes. The territory became formally part of Indonesia in 1969, after a heavily disputed referendum.

The interior of the Asmat houses

Due to the daily flooding which occurs in many parts of their land, Asmat dwellings have typically been built two or more meters above the ground, raised on wooden posts. In some inland regions though, the Asmat have lived in tree houses, sometimes as high as twenty to twenty-five meters above the ground. There are a few reasons for making their houses on the trees. First, there are much fewer mosquitos above the ground, and it’s cooler during the daytime. More importantly, it was for defensive purposes, in case of an attack from an hostile tribe approaching on the river, which was the preferred attack route.

The interior of the houses were designed with open floor plans featuring few walls or divisions between adjoining rooms. Usually, these houses were filled with people, which could host up to 8 or 10 families. Each of these families had their own fireplace with a permanent fire pit that was always kept alight. 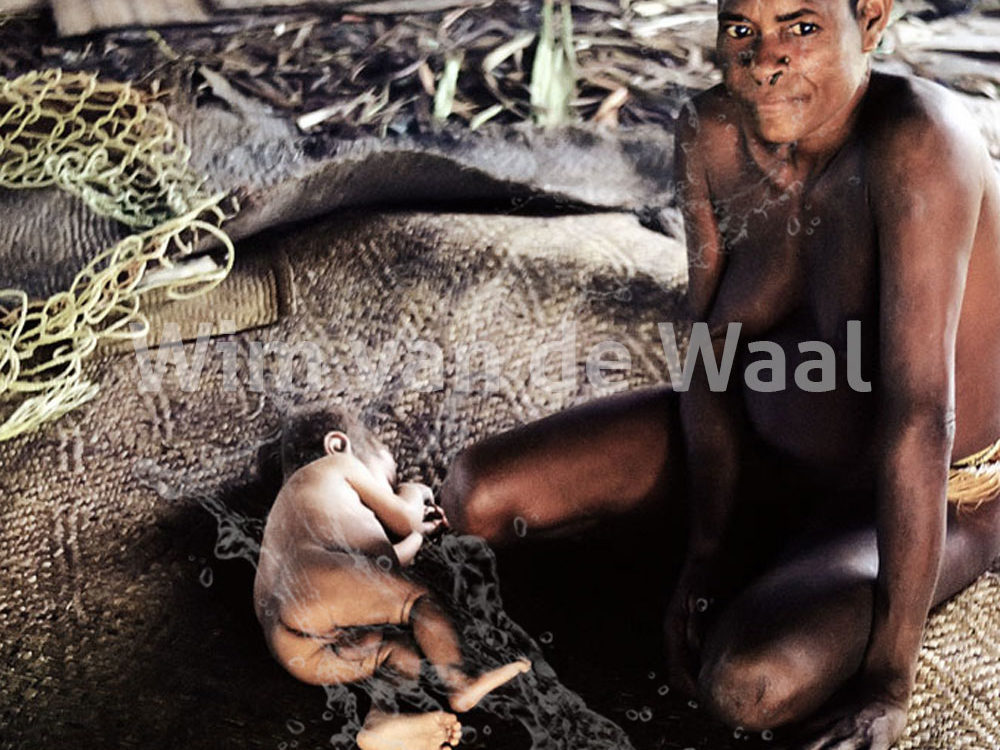 They had no knowledge of how to make fire, though they would collect and preserve flames from natural fires whenever possible.They have traditionally placed great emphasis on the veneration of ancestors, decorating the skulls of their deceased in an honorable way, or even using them as pillows. This way they believed to maintain a closer bond with their ancestors and to ask for their protection. 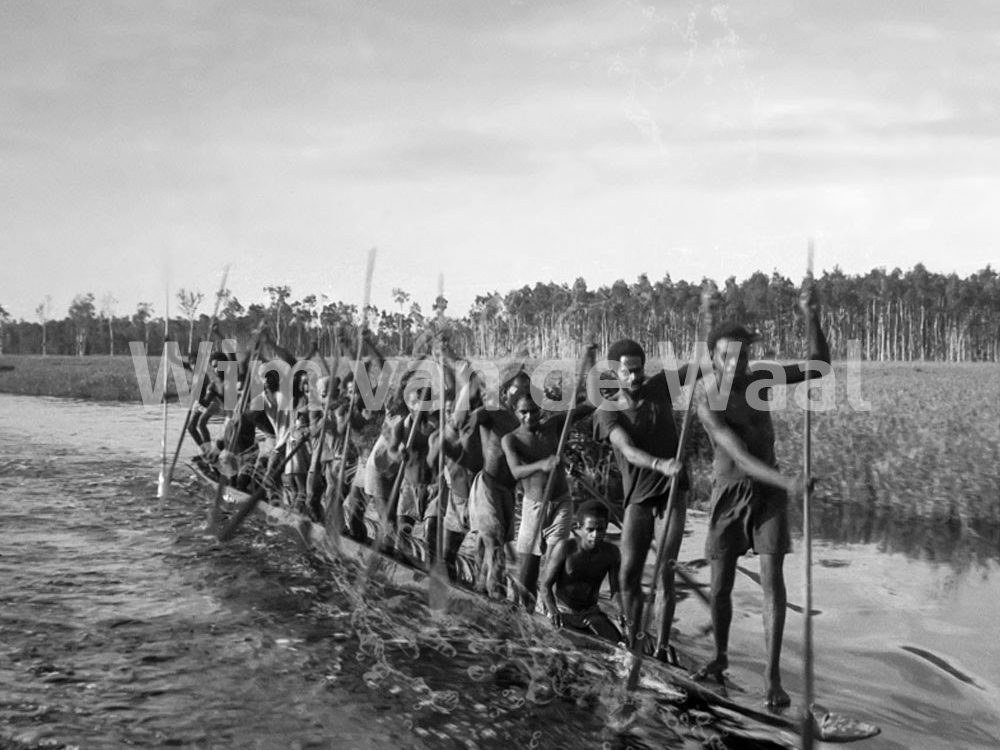 How to explore the Casuarine Coast, the Asmat region and its rivers

One of the many tasks Wim had to focus on was to patrol the vast territories of the Asmat. He had to visit the different tribes that were spread throughout the region, conducting routine inspections on a recurrent basis.

The canoe resulted to be the most convenient transport mean to fulfill this task. It was an extremely significant factor when deciding on a specific patrol´s route. Not only was the canoe’s maneuverability impressive, but also its speed. However, Wim had to be creative since the canoe was neither comfortable nor stable, nor motor powered, … A long patrol journey would require additional safety, minimizing the risk of weather extremes.

To accomplish his mission Wim decided to build his own catamaran, lashing together two single-hulled canoes with a broad, flat deck between them.

It measured approximately 16 meters long with an outboard engine installed in the rear of the aft compartment. It resulted to be a far more suitable vessel for exploring shallow waters and swampy coastal areas. Furthermore, he was always accompanied by two Papuans who assisted him with translations into local language, whenever it was required.

The labour to be carried out

Among the various tasks performed, Wim had to finalize the construction of a small airstrip at Pirimapun, the dutch outpost in the region. The aim was to facilitate communication with the outside world, especially for administrative matters, but also for supplying medicines and other equipment.

The labor conditions on the airstrip were extremely difficult. Initially, there was lack of construction materials, and no power supply at all (there was no electricity). The job had to be carried out with shovels and spades, so it took some time to clear everything up…

The situation changed significantly when the wheelbarrows arrived. The locals could finally get rid of the rudimentary construction means (made from folded palm leaves) and started familiarizing themselves with the new ‘invention’. 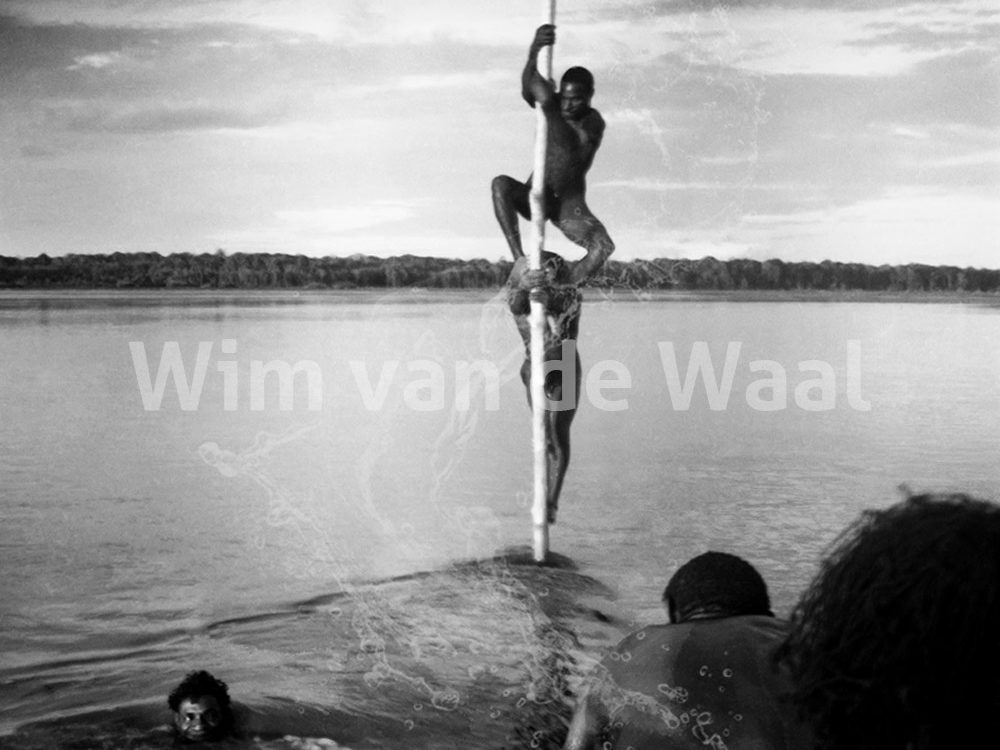 As a matter of fact, these Papuans had no knowledge of the wheel nor its uses. It took them a while to get used to the wheelbarrow, expressing their enthusiasm with jovial tones and comments like „this must be something of the whites! “ 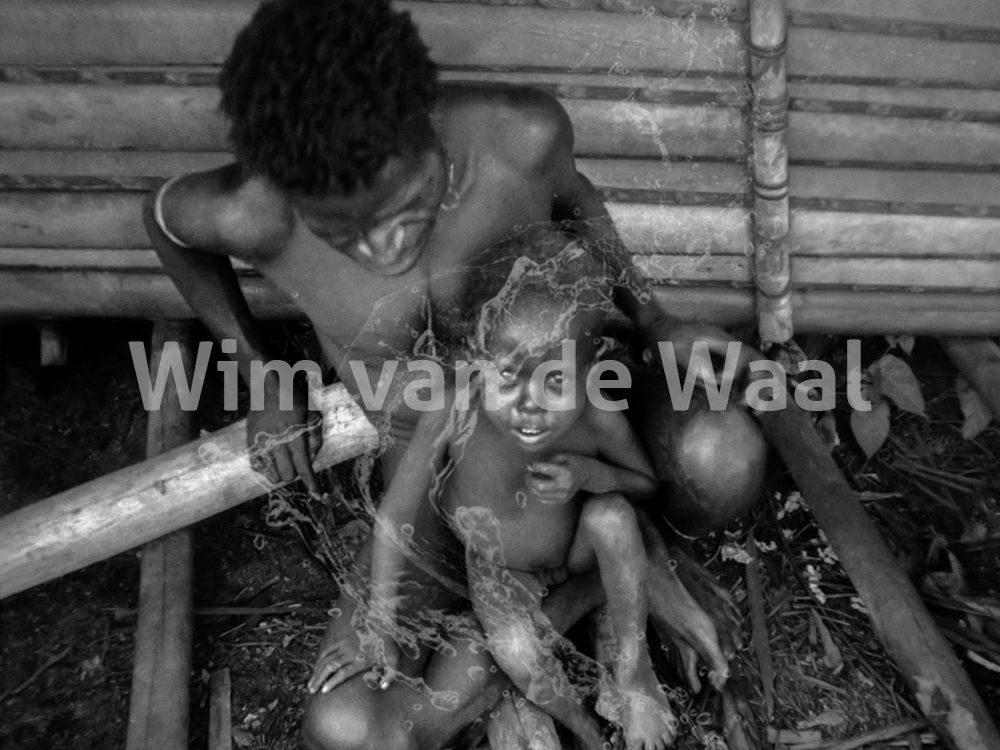 The people and their obligations

„Very kind“. That’s how Wim described the people he frequented.

The common assumption was that women were more dedicated to domestic tasks, taking care of the day-to-day life of the house, preparing food (sago), fishing watching out for the animals, and rearing their young. Above all, they had to keep the fire alive, feeding it constantly with wood and dry grass, to maintain the heat in the living room.

Men worked on reparing the canoes and constructing the houses, as well as preparing themselves for hunting. You could often see them trying out their new bows and arrows.

They also used their spare time for doing woodcarving, an activity that could last for several days or even weeks. The men felt obligated to represent their ancestors in shields, in large canoes, and in poles consisting of human figurines.

There were some extremely good artists amongst them who truly lived and painted the life they saw. The carved figures had always names of their ancestors or close relatives, and the most impressive ones were usually taken for the festivities.

The Papua tribes in the region revered their ancestors

Motivated by their artistic efforts and their social structure, the Papuans were keen to organize and celebrate feasts. Many people from the surrounding areas joined them to the beat of drums, much to the amazement of the locals. These feasts could last up to a fortnight or even more but at the same time, the Papuans were always alert for possible sudden attacks.

The book presentation & exposition in Santa Cruz of Tenerife counted with two tracks of excepcional audio taping which were rescued from a magnetofon tape which Wim guarded all this years in its original shape. To look at thes photo gallery, surronded by this music was an experience difficult to forget. 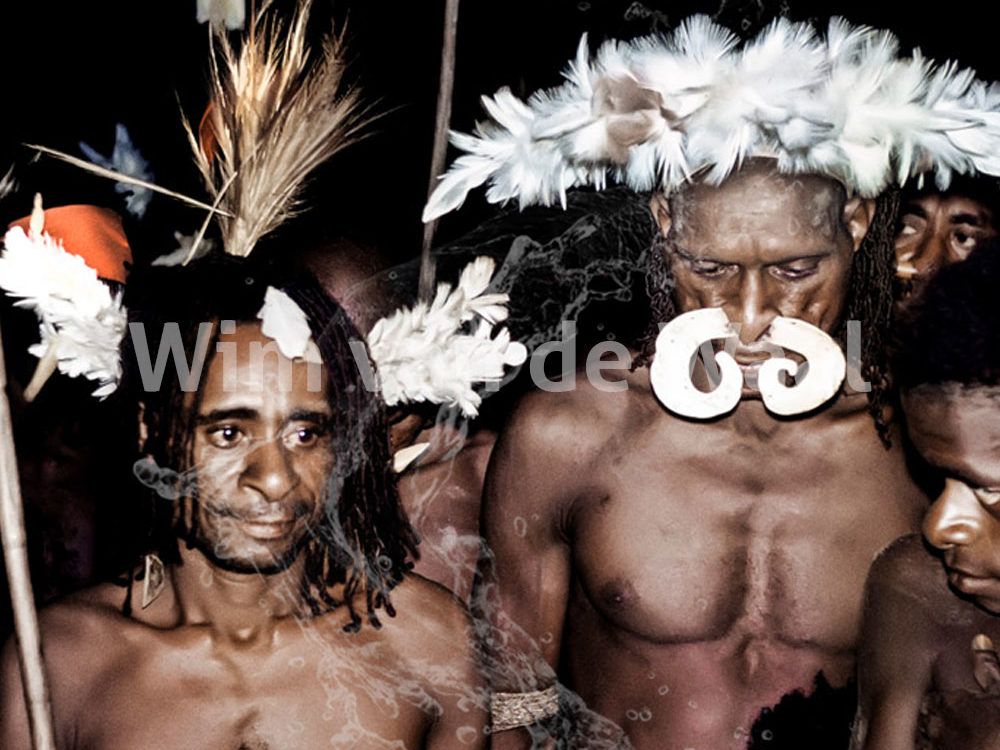 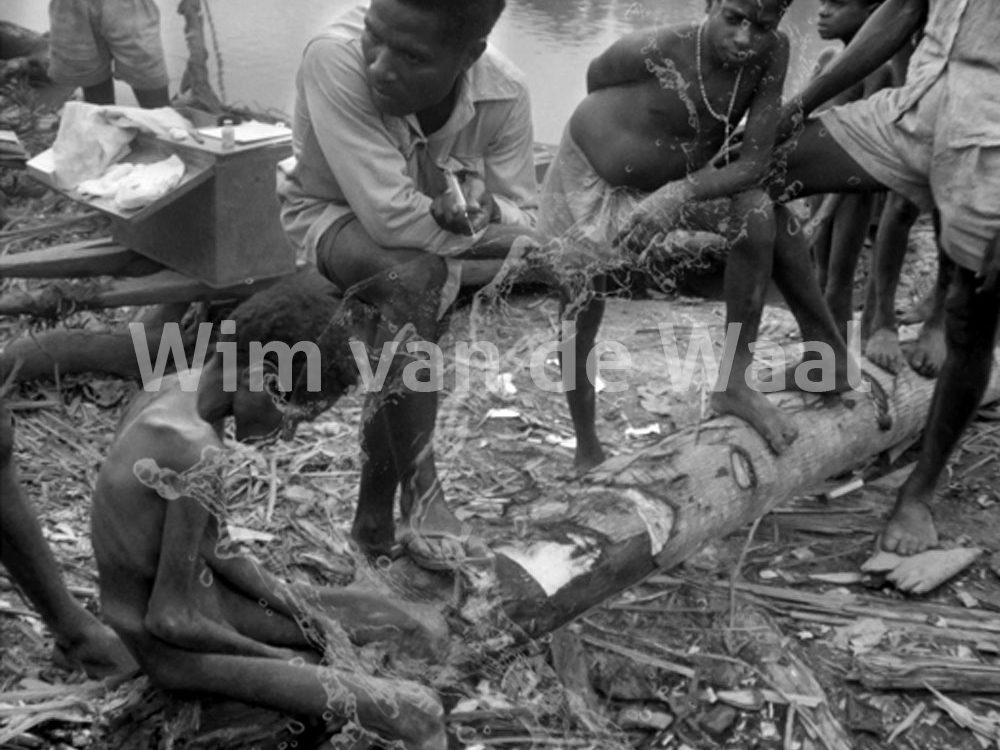 It is obious that in an environment so hostile there existed many diseases. The most important desease was the framboesia, yaws or pian. A syphilitic type of bacterial disease which attacked the skin, the muscles and the bones an finally caused death. The contamination took place via simple contact or insect bites.

One year before the arrival of Wim a timid intent was made with the start of penicilin vaccination campaign of the Papuans of the area. Apart from a whole range of diseases the people suffered from wounds caused by attacks with arrows and daggers.